Artwork showing the special memories of local school children have been unveiled at Brio Landale Court as the new retirement community opens its doors for the first time.

Budding artists from Newtonhill Primary School created the artwork as part of a competition organised by the team at Brio Landale Court in Chapelton. Children from every class were invited to paint or draw a picture of a special memory they have with a family member.

All 257 pictures entered into the competition are now displayed on new hoardings at Brio Landale Court, which will surround the community’s second phase of construction.

The pictures were seen for the very first time on Sunday (1 September) when the new retirement community officially opened and hosted the start and finish of a 5km charity walk, which was part of the Chapelton Bike Ride. 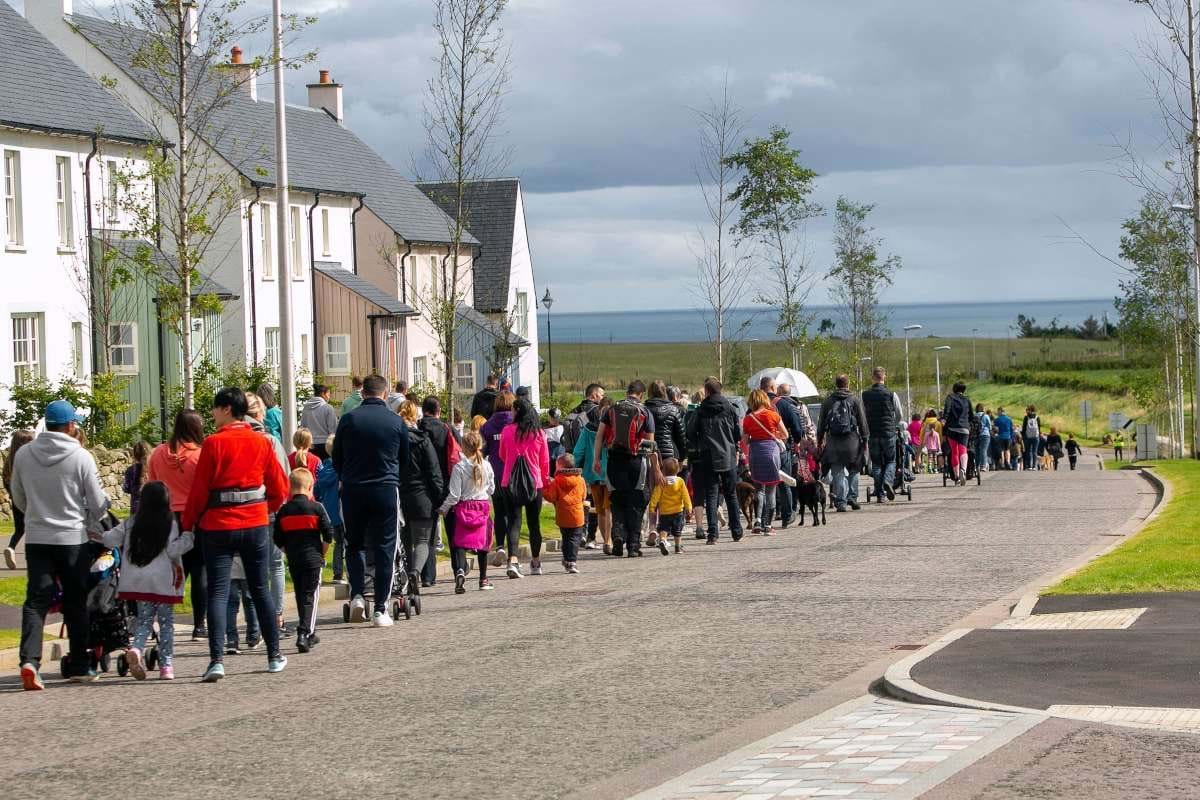 The drawings show memories ranging from days out and holidays to picnics and parties, with many including grandparents as well as parents and siblings.

The popular charity walk is sponsored by Brio Retirement Living and raises money for North East Sensory Services. This year the walk saw an increase in fundraisers taking part, including children from Newtonhill Primary School.

Judges of the Special Memories competition were Karl Hallows, Director of Development and Sales at Brio Retirement Living, and Caroline Fife, the Duchess of Fife, landowner and developer of Chapelton in Aberdeenshire.

Karl Hallows said: “We were both overwhelmed with the phenomenal response and the effort of the local school children. It is fantastic to see the children’s creativity on show for all to see, including the huge amount of people that turned out for the charity bike ride and walk.”

Caroline Fife added: “The memories depicted by the children were both poignant and reflective of fun family days out, and really struck a chord with the judges. We would like to thank the children of Newtonhill Primary School for taking part and everyone who attended the charity bike ride and walk, it was a wonderful day.”

A winner has been selected as well as a runner up from each year group. Every child who took part received a certificate and the winners and runners up were presented with a gift voucher at a recent school assembly attended by Louise Richardson, Brio Landale Court’s General Manager, and Ashleigh Baldwin, local marketing co-ordinator.

The winner and runner up pictures have been framed and displayed in the hobby room in the retirement community and all entries will be in a book to be kept in the homeowners Club Lounge.

Karl added: “We are delighted to be opening Brio Landale Court and we look forward to welcoming our first homeowners who will soon be making their own special memories as they enjoy their retirement at Brio Landale Court.

“Brio Landale Court is Brio’s first retirement community to open, we have a further two communities opening in the next few weeks, one located in London and the other in the Cotswolds.

“We are incredibly proud of Brio Landale Court where we have developed a modern, safe and secure retirement community offering a host of on-site facilities and care and support that will enable every homeowner to live life their way and to the full.”

Staff, homeowners and visitors at Landale Court have helped to raise funds for a national respite centre providing short breaks for those living with MS and other long term conditions.

How to celebrate Hogmanay the traditional way

Christmas may be an important date on our calendars, but there’s one day that eclipses it for Scots and that’s Hogmanay.

Loneliness can be an issue for anyone of any age at any time in their lives, but the festive season can be the loneliest time of all for so many people.